Peter Forrest interview. From A- Z 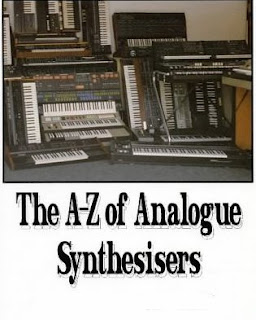 As most synth heads know, the two books you simply must own are both from Peter Forrest!

The A-Z of Analogue Synthesizers is a synth lovers dream with so much information about all the great and not so great synthesizers specs and history. I caught up with Peter and asked him some questions.

Can you let us know your background.

I started making music with a friend at university in, ahem, the early 70s. He had a Philips Philicorda organ, I had a Bird Duplex organ, and we bought an Akai 4000DS tape machine between us. The Bird was a crazy choice - I chose it over a Vox Jaguar when I was keen to play with some other friends who had a guitar-based band. I still have it - which is even more crazy, especially as I've had to sell most of my favourite synths in the meantime.

Do you remember a key moment when you fell in love with synths?

I was intrigued by a Synthi AKS when I went to teacher training college after university, but didn't follow it up. The Roland SH-7 was the first synth I actually owned.

Was there a sound / recording that did i for you?

I think it was the Moog bass-lines on Van Morrison's St Dominic's Preview LP, and the soundscapes of Tonto's Zero Time, and Zodiac : Cosmic Sounds. But it was Zero Time that really hit the mark.

Your books A-Z of Analogue Synthesizers is a fantastic resource for people into synths. I bought the original A-Z back in 1996. I see it was then reissued and expanded. How well has it sold?

It's sold in small numbers - I just ran out of the second 2000 of the A-M, and must re-write it. It's great, because there's so much stuff that's come out since 1998 - but that means it will be hard work.

Have you sold more of one than the other?

More A-M, just because it came out earlier than the N-Z.

I assume you have owned your fair share of synths. Do you have a favourite?

I hope I never have to sell my Prophet-T8.

Are there any synths you regret selling or have you held on to everything?

I've sold most of the great synths I've ever owned. Just needed to for financial reasons.

I think the Alesis Andromeda A6 was the last polyphonic analog synth. It reminded me of a Jupiter 8 meets a Memorymoog meets a CS80. The only thing that made it not THE BEST SYNTH EVER was that it seemed unfinished.....I have found all synths seem to lack that "have it all". Have you found a have it all synth?

The T8 is the closest, despite its imperfect envelopes. If only the JP-8 or Memorymoog or Andromeda had a keyboard like that....

It's been going well for twelve or thirteen years, and seems to be on a bit of a roll at the moment! I get to play with some fantastic or rare or otherwise interesting instruments and effects, and it's satisfying that people are very happy with their sales and purchases.

Can you see an updated version up to 2009?I guess it would be a huge task.

I have to update the A-M, which is luckily the half of the alphabet where most of the new projects sit.