Swinburne Radio are doing a special on Vicmod Records tonight at 8pm.
Expect to hear avant electronics from the likes of Warren Burt, Richard Lainhart, Cray and his many aliases, White Noise Carousel and many more local and international modular synth heads.

You can tune in here.

11 August next Vicmod meet
Posted by VICMOD at 6:53 PM No comments:

The next Cray release DELTA WHAN will be released in September 2013 on Rocket Machine Tapes. Here is the artwork. 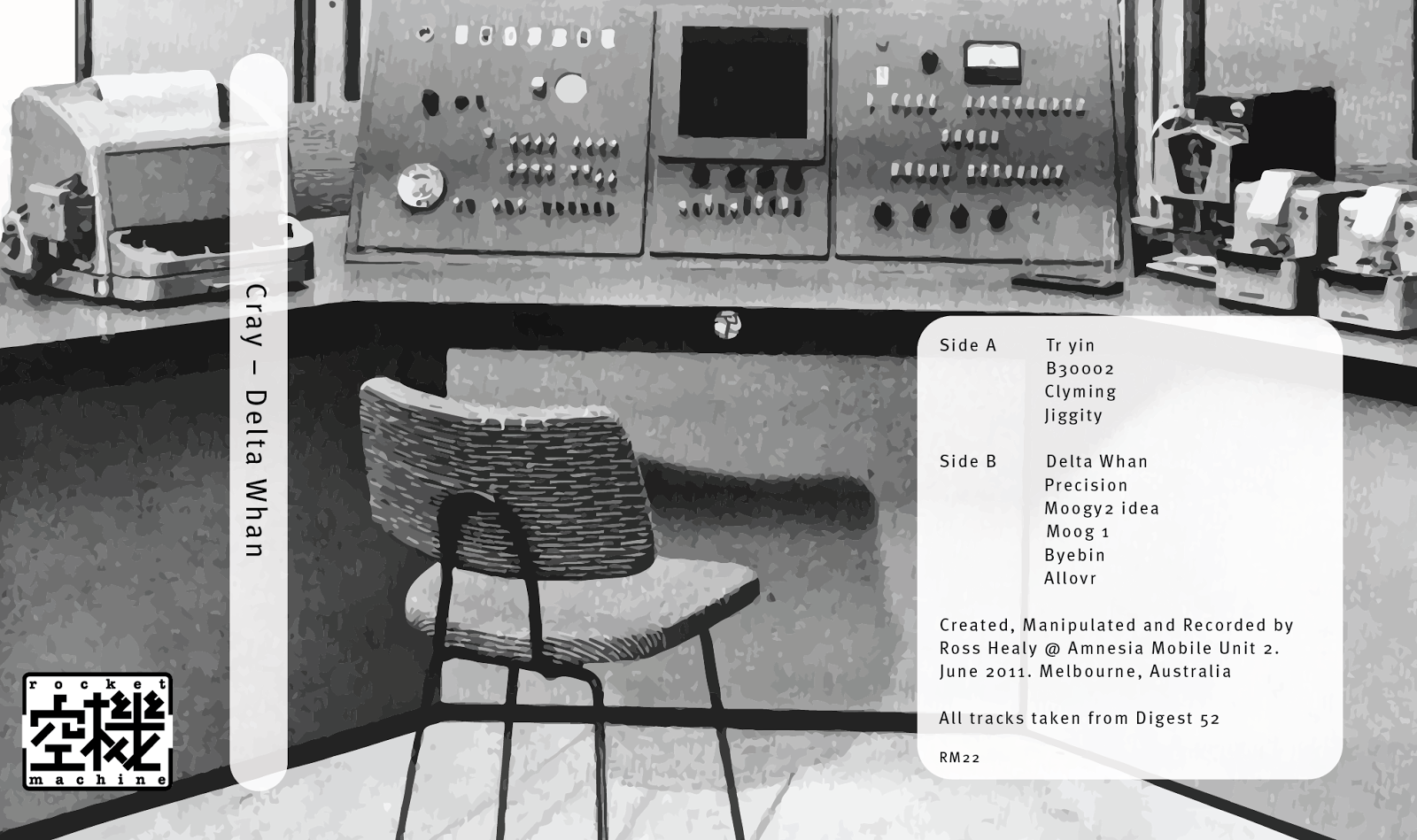 Posted by VICMOD at 8:39 AM No comments:

CRAY – DIGEST 54 (cassette by SicSic Tapes)
'Digest 54' is a stellar and somewhat interstellar tape from Ross Healy's Cray project -- one which consistently supplies variegated textures and timbres, as well as an eye for the dramatic. Healy's pedigree as a leftfield electronic musician (including his time in EBM act This Digital Ocean, and a solo 2001 album for legendary weirdo-electro outpost BiP_HOp Records) comes through in the way these tracks grip you by the nether-regions and tug you in. Here he's laid down a collection of sound experiments, each side a fertile bed of treats sketched out by synthesizers. The beeps and burbles include Warp-like chords (“Delva,” “Heek”), slack zone-out audioscapes (“Corrupt,” “Un8d”), and the sultry tones of R2D2 hopped up on goofballs (“Premble”). “Ugly Martian,” meanwhile, takes the album crown with its walloping eighties crime-wave bass loop. The moments that draw into the background are pushed into the periphery mainly by the fast grip of the tape's more
toe-curling contingent; but these less immediate tracks are still, generally, worthy kicks at the can: the curious combination of liquid synth-slosh and throbbing powerline-glow on “Dabuda,” the dreary neon orbs that populate “Basquiat,” and so forth. There's a lot to process here, so much so that one is tempted to fault Healy for this record's disjointed structure. He skitters from idea to idea, seemingly out of a compulsion to document each of his distinct approaches to sound. Perhaps we can pin this on Healy's background in electronic music: listen to some of the stuff Rephlex was putting out a decade or so ago, and you'll encounter the same sense of things being thrown at the wall to see what sticks. But the key, as always, is the fact that Healy doesn't just smear turds on his canvas -- these tracks are legitimate sound-niblets, each with something compelling to share. Only eighty copies of this tape exist on this planet, so you're advised to act fast. (MT)
Address: http://www.sicsic.de
Posted by VICMOD at 8:29 PM No comments:

You can grab the last few copies of the new Cray album on SicSic here
http://www.sicsic.de/sicsic051/ 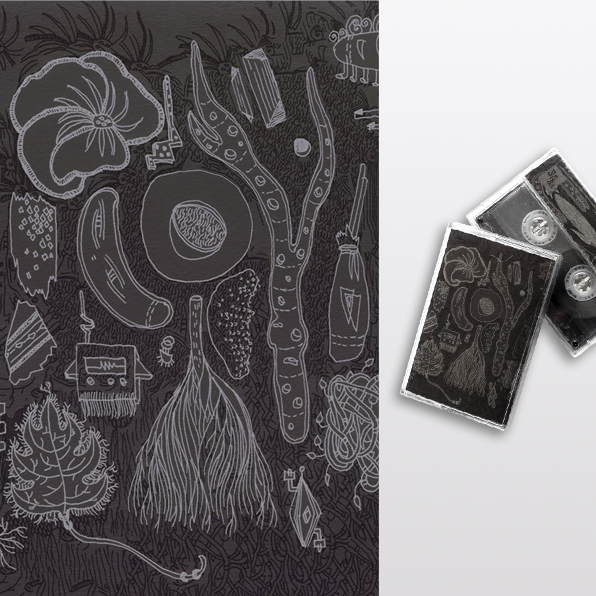 Posted by VICMOD at 7:52 AM No comments:

Cray has just put up a free album on the mighty Buchla modular.
You will hear 44 minutes ov avat Buchla electronics.

join tumbler Its In My Brain Now

For all things modular, technology, nature, art and science look no further than
http://cray5656.tumblr.com/ 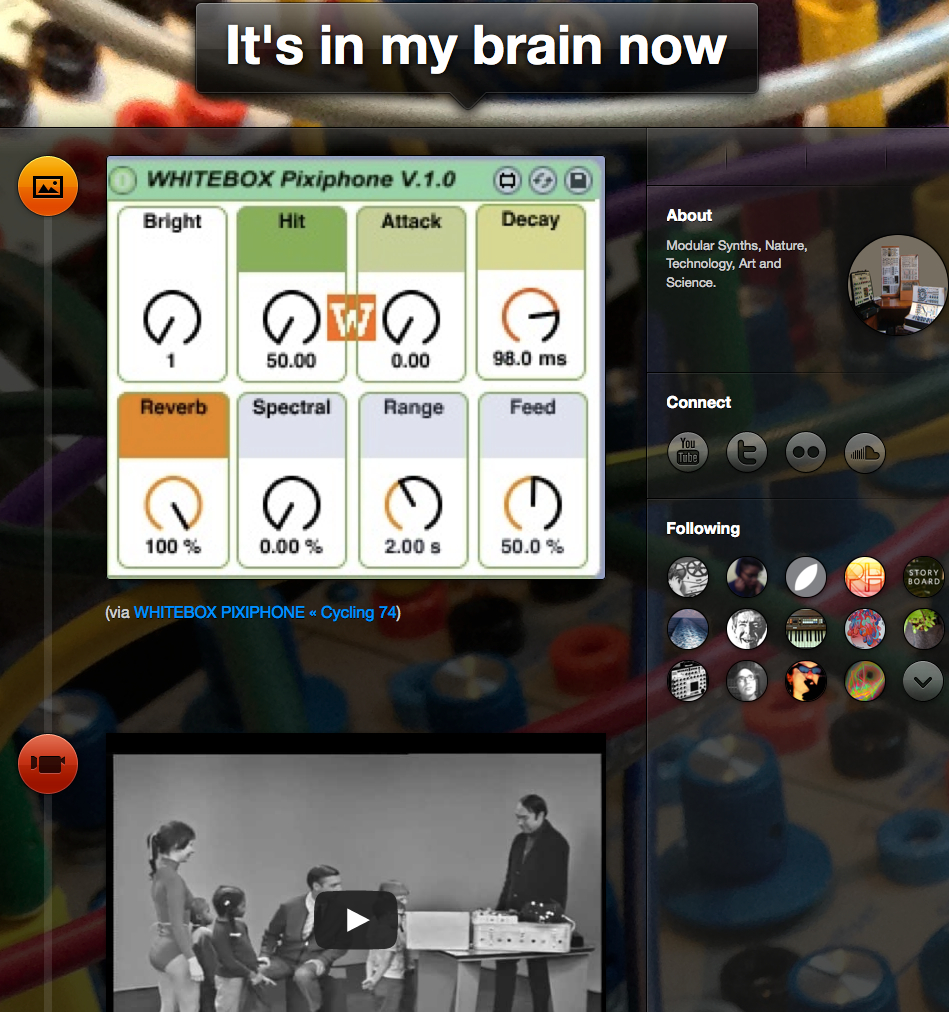 VICMOD Records, the home of Avant Electronics, are now offering free downloads in any digital format your playback needs require.
They of course appreciate any donations you are able to contribute so VICMOD and the artists are able to continue to bring you the worlds finest analog electronic abstractions.

You will here experimental sounds emanating from modular synths like the Buchla, Serge and Euro modulars, Blippoo Boxes and much more form Artists all over the globe. 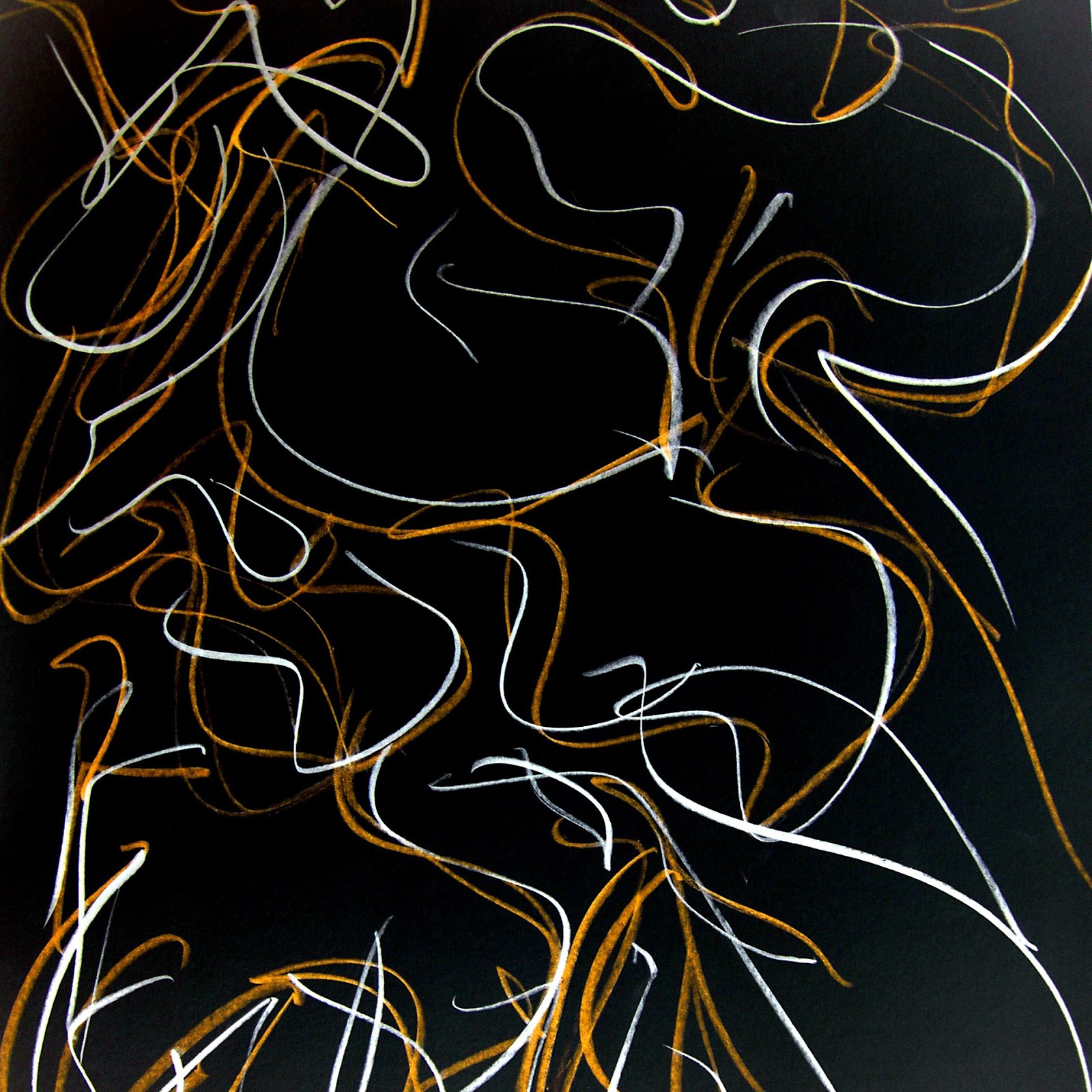 Amazing new release from Richard Scott. If you love abstract electronics this is for you!
This album shows some of the ways Richard uses this wonderfully creative little synthesizer more or less as a solo improvising instrument The tracks are all recorded live without any subsequent overdubs or edits.

Some of my favourite computer music records

Posted by VICMOD at 7:05 PM No comments:

Composing With Process : Perspectives on Generative and Systems Music

I have been really enjoying these radio shows curated by Mark Fell and Joe Gilmore.
Composing With Process : Perspectives on Generative and Systems Music is the name of the program and it is exactly what it is about.
If you love the more esoteric studies of electronic music, as I do, you will really enjoy listening to this stuff.
So far they have created 8 podcasts with extras that usually have exclusive performances by the likes of Mark Fell and Florian Hecker.
http://rwm.macba.cat/en/composingwithprocess_tag

Listening to all of this reminds me of a time, just before the turn of the century, when Microsound was really happening and my awareness of artists like Xenakis, Curtis Roads, Trevor Wishart, Herbert Brun, Pierre Henry, Parmegiani, Tod Dockstader, Kim Cascone and the original Mego records artists Fennesz, Pita, Farmers Manual etc (before they became Editions Mego) was amazing and each week there was some brilliant music to purchase, take home and devour.
Posted by VICMOD at 5:40 PM No comments:

Do also check out the Cray web page with discog vids etc.
http://cray5656.wix.com/cray

Posted by VICMOD at 7:50 AM No comments:

I have decided its time for a Cray web page
http://cray5656.wix.com/cray 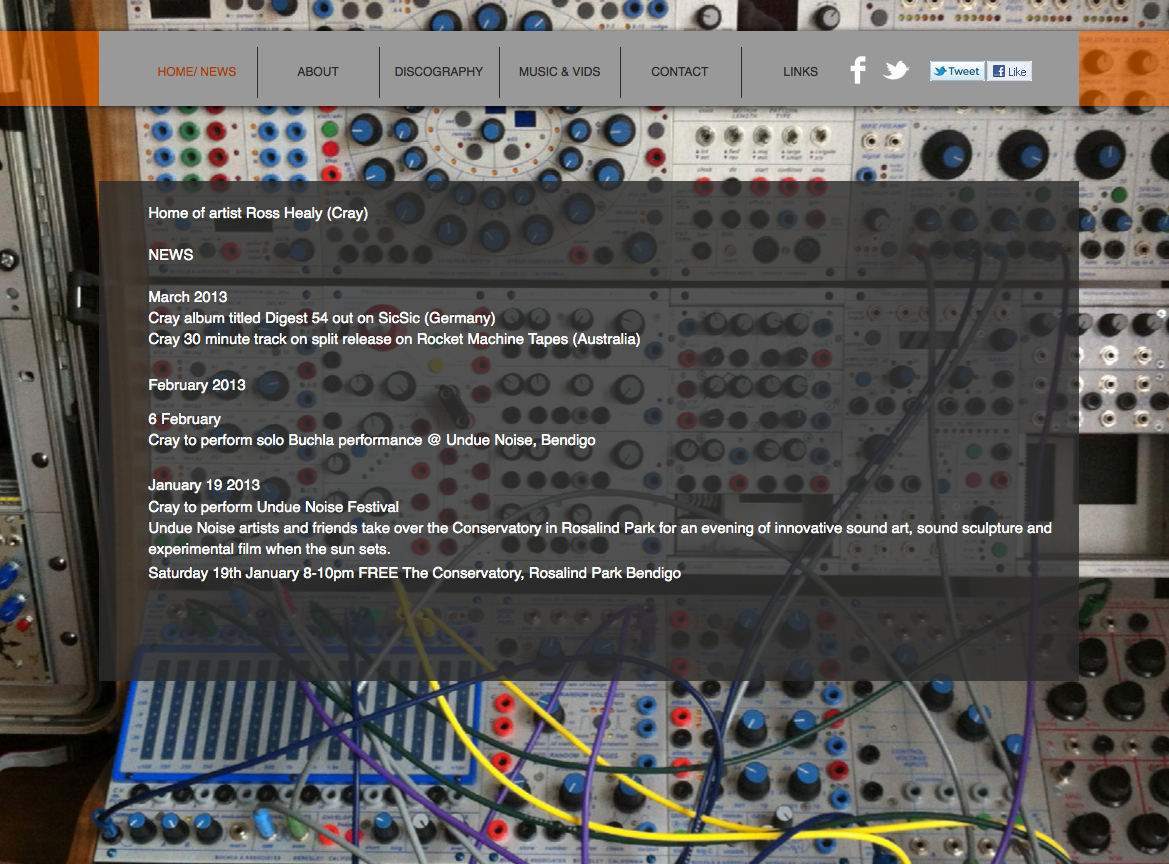 Posted by VICMOD at 3:50 PM No comments:

Richard Lainhart Life As A Masterpiece

Excellent Richard Lainhart article
http://www.tokafi.com/news/richard-lainhart-life-as-a-masterpiece/
Posted by VICMOD at 7:50 AM No comments:

We are pleased to announce 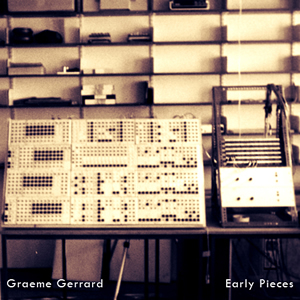 ) which is the proportion used in Equal Temperament tuning of adjacent semitones.
I cut lengths of tape that were recordings of white noise, and rearranged them into an order or “set” that had interesting mathematical and musical properties, and interleaved these with recordings of silence, (blank tape), that were a kind of “inverse” of that duration set.  This scheme was used to create the formal design of this short work.
The other sound used is a cluster of chromatic sine tones transposed to different frequency ranges.  I made a loop of the noise tape, which is one of the main sounds in the piece. The piece begins with this loop, which is played at faster and faster speeds to form the first section.
I made a number of tracks of these sounds, using effects such as flanging, chorusing and reverberation, and mixed them while preserving the temporal structure outlined above.

Using various programs I had written, I generated seven scores of MIDI data which I synthesised using a mixture of pitched and percussion sounds. I mixed these sections in different combinations and hand edited the result.  Originally this piece was about 45 minutes long.  I have cut it down and re-edited it several times for different events, including to accompany live performance painting in Bologna, Italy.

This piece is made from samples of birdcalls I recorded at my home in Healesville, Victoria.  It focused on spatial manipulation of the sounds.  In live performance, as Think Out Loud, it used an additional 4 loudspeakers swung overhead by people using ropes about 2m in length.

Anistropy (Lumps in the Gravity)

This piece was largely made using a program that generated fractal melodies as MIDI data.  It uses a synthesised digital jazz ensemble.  The main idea was to bring random elements into orderly clusters, then allow them to drift apart into sparser, apparently random gestures.  The title was a mistake – it should be Anisotropy, but at the time it appealed to me to leave it stand.

This piece was realised on the Serge Tcherepnin modular synthesiser.  I was experimenting with how sequences of notes formed perceptual groups, and melodic streams, based on octave placement and emphasis.

This piece is a digital realisation of a technique used in bell ringing called Plain Bob Minor.  It is a way of changing the order in which bells are rung, by exchanging the order of pairs of bells, until the order completes a cycle and returns to the original.  I developed a kind of pitched percussive algorithm to synthesise the sounds.

This was the first piece that was generated by a composing program I wrote in 1983-5, called COMPOST.  It began as a program that distributed notes in a stochastic manner, generating a score for digital synthesis, in this case using frequency modulation techniques to achieve complex spectra.  This version was quite primitive and I had to run the program several times to create sections of the score.
Slang (1980)

I made this piece on the Serge synthesiser around the same time as Streams/Groups.  It was performed live at the Adelaide Fringe Festival in 1980 with trumpet and tenor saxophone.

This piece was generated by a later version of the COMPOST program.  By this time COMPOST was more oriented towards manipulating structural elements in a composition, using transformational grammar techniques.  The sounds themselves were synthesised using a digital string algorithm that incorporated many elements of real string playing.
Posted by VICMOD at 11:24 AM No comments: