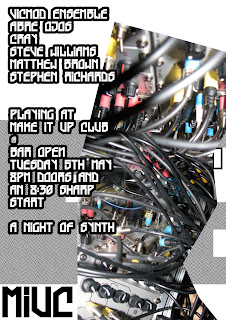 A night of modular analog synths, computers and little boxes or tricks.

Cray (Ross Healy) will be making a rare live appearance featuring a computer music live set, then Ross and his Buchla 200e will join VICMOD ENSEMBLE for an all analog modular performance.

Abre Ojos (Scott Baker) will also be performing a solo set on his diy modular then joining VICMOD ENSEMBLE.

Should be another great night of synth sounds!
Posted by VICMOD at 2:58 PM 2 comments:

here is a longer version 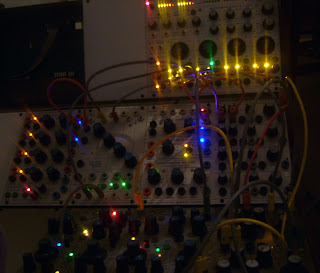 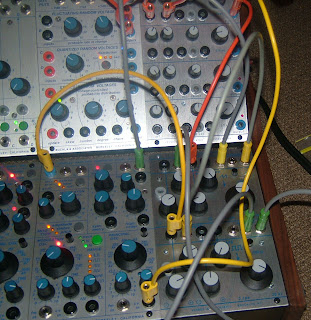 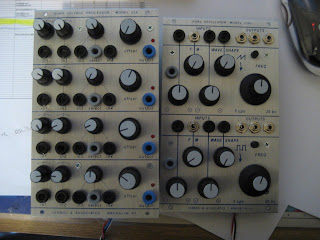 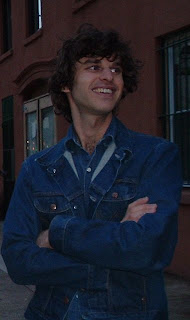 Make Noise are not just another euro rack modular company. With just a few modules to their name they have made quite a racket.Amazing modules, great designs and great sounds!
I just had to interview Tony Make Noise Rolando.


➢ What made you start MakeNoise?
While on the road with the band, I found myself repairing echoplexes,
farfisa combo organs, wurlitzer pianos, tube amps, stompboxes and what were then cheap analog synths such as the Pro One or Roland Juno.
Honestly, I have never owned a piece of music electronics that I did not open up! My skills at that point were limited to what I was taught by a well respected, retired engineer in Chicago. He let me hang out around his shop and ask questions-showed me what to look for, gave me some guidance in soldering (though my father had already taught me how to solder pretty well). In 2003, the band broke up for the last time... I had nothing but time on my hands. We lived within walking distance of the Brooklyn Public Library. They had a great collection of 60's and 70's era electronic engineering texts. Books written by guys like Bob Pease ("Troubleshooting Analog Circuits" was a good one, hopefully it is still there). My interest in analog design turned to obsession. I took a job with Moog Music, and learned what manufacturing of analog electronics is all about!
Billy Corgan (of smashing pumpkins fame) came to visit the Moog plant. I think most people reading this would be surprised to find out that he is a synth-geek, and is especially enthusiastic about modular synthesizers.
He said something that really stuck “... the current generation of musicians are more interested in creating new and unique systems for making music than in mastering a single musical instrument...”
I later had the revelation that the modular synthesizer is the perfect
combination of musical instrument and musical system. The artist is able to construct a unique system, from the selection of modules, to organization of those modules and the case in which they reside. The system may be de-constructed and reconstructed at will. The open
architecture leads to unique technique and the tactile, physical nature of the system encourages expressive and spontaneous performance.


> You built a Wogglebug for me a year ago. You have since released the modDemod, QMMG and Format Jumbler. What can we expect next from MakeNoise?

With great pleasure and special thanks to Grant Richter, the euro rack
format Wogglebug.


> How has the response been to your products?

Response from the end user has been a thrilling element of running Make Noise. It may seem ridiculous to some, but I feel as though I am a small contributor in the music that is made with Make Noise instruments, and so I get a real kick out of hearing it.


> I see MakeNoise to be a kin to The Harvestman, in the sense you are really both bringing out extremes in modules. Do you see your company mainly looking towards the noise/experimental end of the market?

I try to design for maximum functionality. Ideally, all Make Noise will
scream like a choir of dying insects, AND sing soft lullabies for
baby... but mostly the dying insect bit.


> Do you like Noise as a genre? Who are some of your favourite artists?

When I was 14, my friend went to California to visit his brother, who
had a legendary record collection. He returned with cassette dubs of
several albums, one of which he gave to me because, he said, “...it
sucked.” The tape had Sonic Youth's “Confusion is Sex” on side A and
their “EVOL” album on side B. To this day, I have never been so
frightened by a piece of music as I was upon the initial plays of those
two albums. My vision of what music could be, and the role of noise
within music was forever changed. A couple years later, 1988 I think, I
went to a record sale at the library in my town. I bought records like
crazy then, choosing most of them based on the cover art, just trying to find something new in a town that was consumed by classic rock format radio. Sure I came home with a lot of bummers like “Klaatu,” but on that day in 1988, I came home with Morton Subotnik's Silver Apples of the Moon and an even more amazing album called “Electronomusic” by John Pfeiffer! It took me many years to understand how those records were made, and I suppose that is also part of how I came to start Make Noise!

My favorite stage performance utilizing noise came from Keiji Haino. I was 18, visiting NYC for the first time. I read about a show hosted by Thurston Moore, at the Knitting
Factory, it may have been one of the early No Fun festivals... This was when the ceiling in the bar was actually knitted! This man stepped on stage wearing all black leather, and playing an all black Gibson SG. He had on black shades too... He played that guitar the way Conan the
Barbarian worked a sword! 10 years later I walked through the studio where EVOL was recorded and I screamed into the cavernous, concrete live room. It was awesome to hear the ambience of that album imparted on my own voice! I had just moved to NYC, I had no home, no job and no money. Not much changed for 2 years.

Recently I have enjoyed strange noise from Surachai, D/AA/D and Carlos Gioffoni. I am completely awestruck by Richard Devine's composition “Matvec Interior” from the album “Cautella.” It is noise as electro-acoustic brain massage therapy.

Still, I sometimes feel the BEST noise is what we make by ourselves setting alone in front of a loud analog computer with a handful of patch cables and hours to kill!

> I have just ordered your QMMG, I love its features and the artwork is so beautiful. I cant think of what style the art reminds me of but its
30s, 40s style?

Thanx! Grant Richter described the Wogglebug artwork as “post-bauhaus,” might that be applied to the QMMG as well?
I like hieroglyphs and non-linguistic indicators. Mostly I find inspiration in the mechanical drawings and schematics for the design.
All of my artwork is done utilizing the same software that I use to layout the printed circuit board. My goal with the module artwork is to have a system that looks less like laboratory equipment and more like the musical instrument on which that artwork is printed. All other
musical instruments have little, if any, text printed on the instrument body. If an interface is well designed and the user's manual well written, the text legend on the front panel is redundant. Once the artist learns how to use the module, it will be like habit where to
insert which type of signal, and which control does a certain function.


> You use to work with Bob Moog? What was that like? Are you still at Moog?

On August 21st, 2005, my partner, Kelly, and I flew into Asheville, NC
to visit with friends. This was the same day that Bob Moog passed away.
I would have never known that Bob Moog and company resided in Asheville, NC if I had not read of his death in the paper the following day. A few months later it was then Kel's idea that I call Moog Music and ask for a job. I learned a great deal working for that company, and it would take many pages to describe the experience.


> Could we see a complete Make Noise modular system in time?

Yes, my goal is a system which could be operated with ease while blindfolded.

You will have to talk to me in person to find out. I'll have a table at No Fun Fest this year. Come see me.

A day in the life of a synth nut 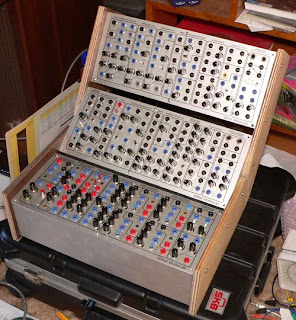 Its been a while..... lots happening.


VICMOD will be performing live again over April and May with special guests.

Currently waiting for my Buchla modules to be returned, Plan B modules awaiting return, Serge /Buchla cabinet to be collected from the mighty Ken Stone this Friday. Yay!

Then Mark Verbos has the Buchla clones coming yay! yay!.

And then a bit later in the year Bugbrand Modular should be here, really excited about this...also expect an interview with Tom Bug at some stage...


Back soon with VICMOD dates
Posted by VICMOD at 1:29 PM No comments: